Learn how the SolShare shares solar power to apartments

The SolShare Technology Explained - Residential: How does the SolShare supply solar energy to apartments?

The Allume SolShare allows the energy produced by a single solar system to be distributed behind-the-meter to separately metered units, making it unique on the current market. 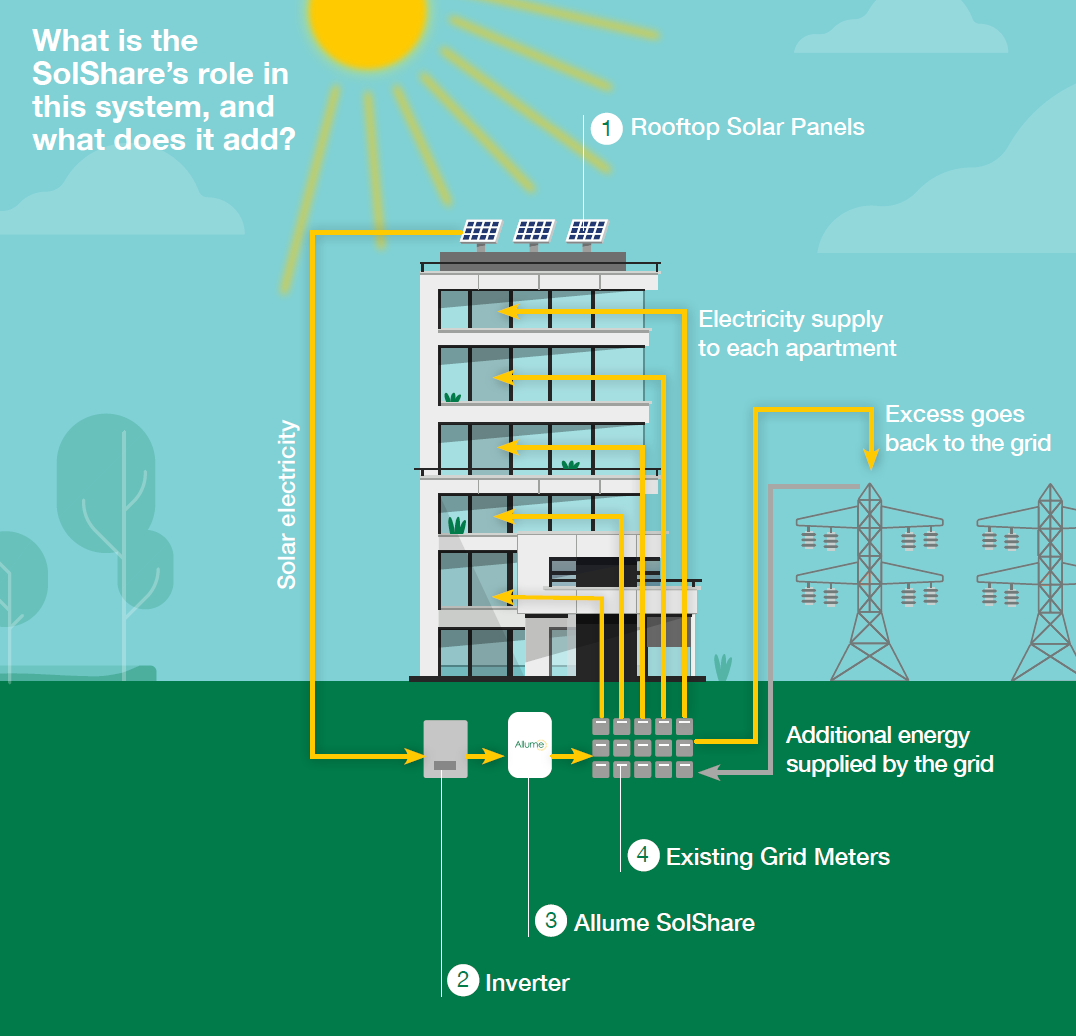 Sharing Solar Energy with the SolShare

The SolShare allows the equal distribution and sharing of solar energy between the various units of a building. But how does the technology work, and how is the energy distributed equally?

The system distributes power on an on-demand basis to maximise on-site solar usage. Each apartment will have a device that constantly monitors the energy usage (load) and feeds this information to the SolShare unit. Using this information, the SolShare will direct solar energy to the apartments in relation to how large their load is at any specific time. This optimised sharing means that the on-site solar usage is 30-35% higher than an individual system, limiting the amount of solar that is not used. The SolShare is the most efficient system to maximise the use of energy generated at any given time. It achieves this by supplying energy to where it is needed most, instead of sending it back to the grid. Any excess energy not used by an apartment (or common light and power) will be sent back to the grid and compensated for accordingly. 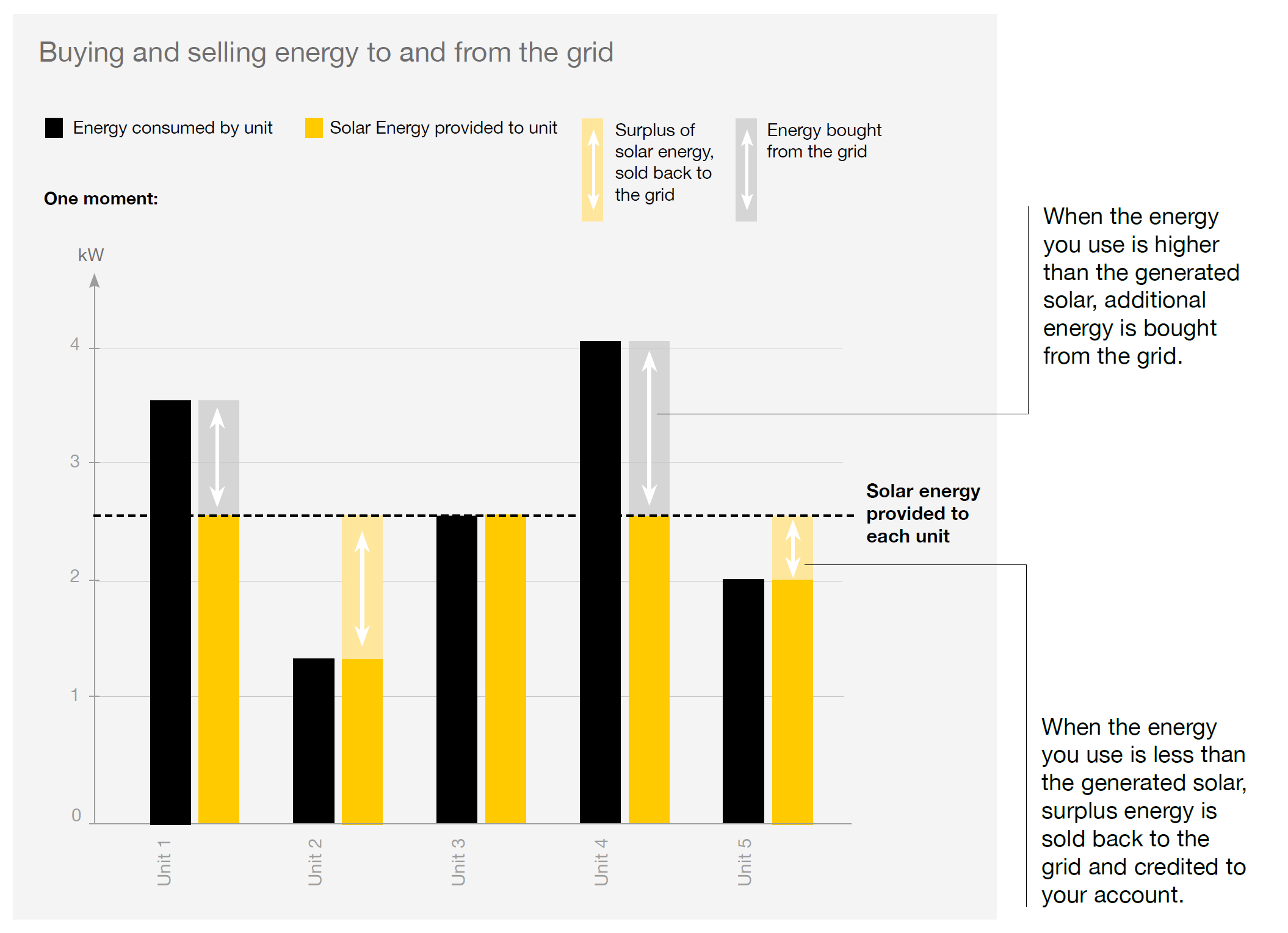 The SolShare distributes energy to users is a way that maximises savings. It achieves this because you and your neighbours will all use energy at slightly different times. This change in energy usage, called a load profile, means the SolShare can help provide you with as much as 35% more solar energy than an individual system. The more solar energy you can use, the more money you save. The below example shows five SolShare users. The different lines show their varying load profiles throughout a typical day. Every apartment uses different appliances and amount of energy at various times, so energy will be directed to each one at the most appropriate time to maximise their financial savings. This slight change in when the apartments require energy (called a ‘load profile’) has a significant, positive effect on maximising the on-site usage. 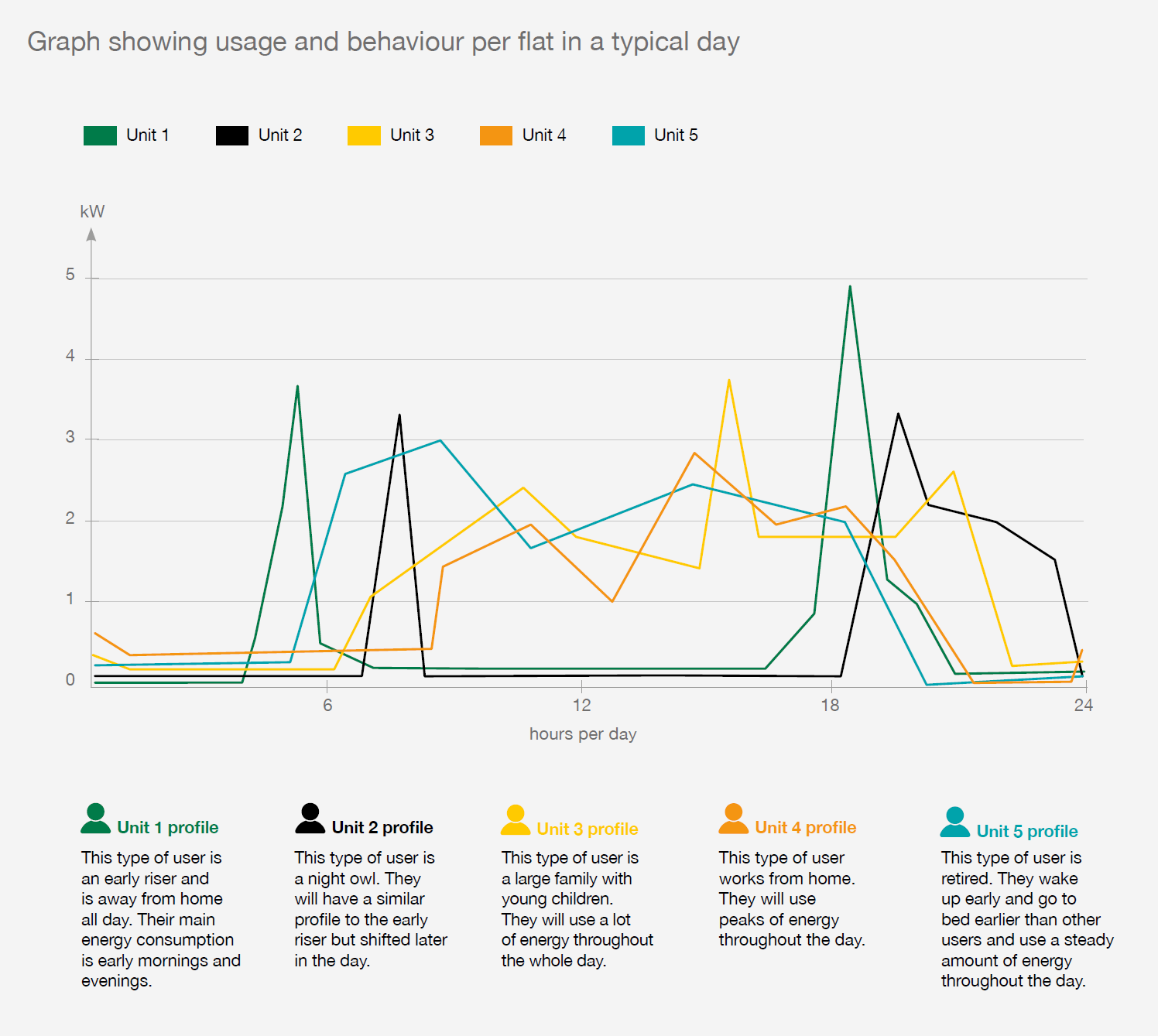 The following graphs show how the SolShare ensures the fair delivery of solar to three units with different energy usage: Unit 1 uses a lot of energy, Unit 2 an average amount, and Unit 3 a low amount. During the month, the SolShare monitors how much solar energy each unit has received and ensures that the same amount has been delivered to each apartment, regardless of their total energy usage. The solar delivered to each unit is represented in two ways. The bar graphs show the total amount of energy that each unit requires (in black) and the amount of solar that is being delivered (in yellow). The pie charts represent the amount of solar that has been delivered to each apartment (in yellow), with a full pie showing that each apartment has received the same amount of solar over the month, regardless of the individual unit’s energy usage. 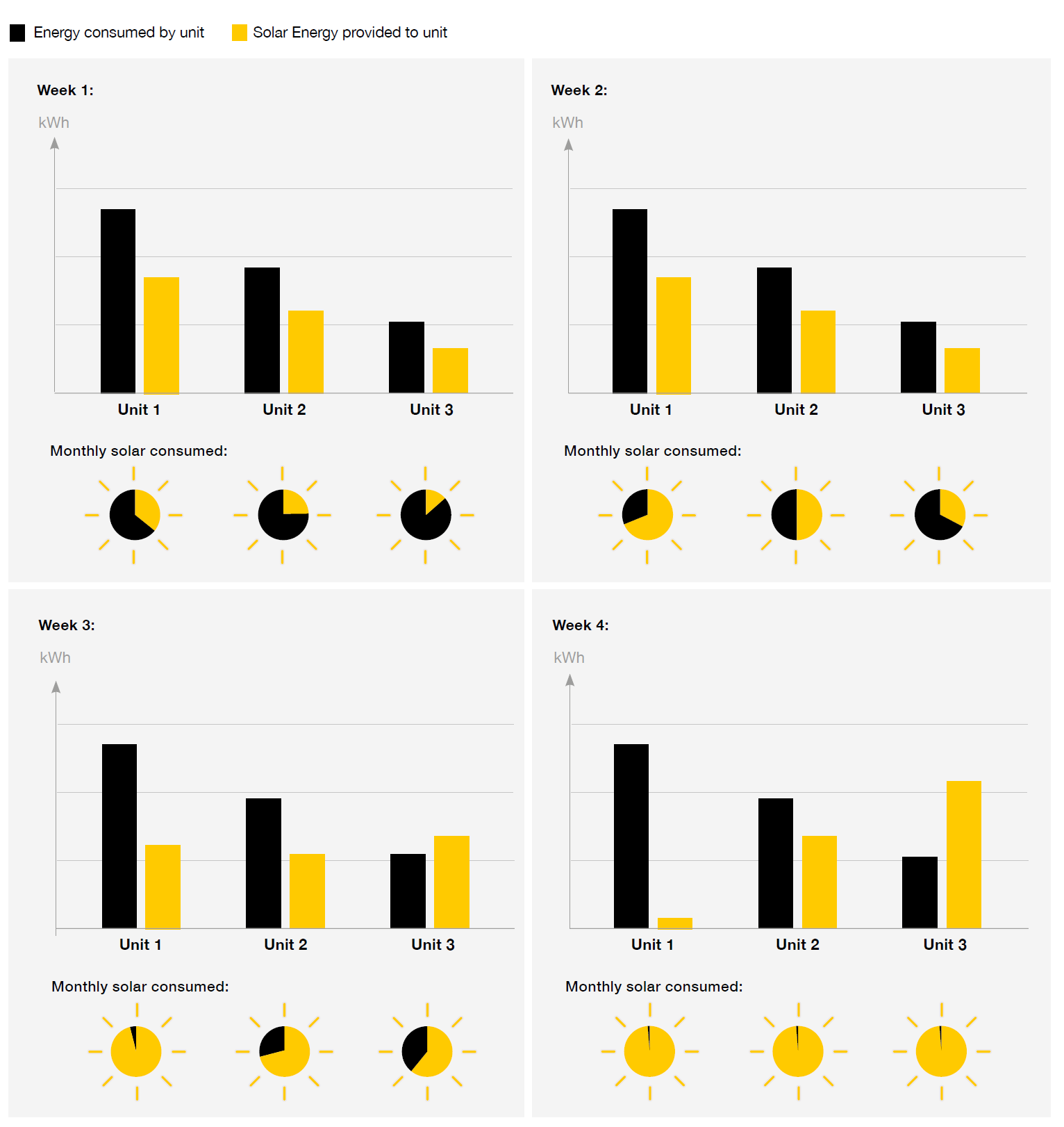 Although the standard delivery model is an even share, this does not have to be the case if it’s not right for your install. Allume can tailor the proportion of solar allowance to each apartment. For example, more can be directed to a three bedroom apartment than a one bedroom, or the system can fully optimise and send the solar exactly where it’s needed, regardless of how much a unit has received. Just let Allume know what type of sharing model works for you.

This is data from a live SolShare install. The install consists of 8 units of varying energy demands. Every month the SolShare begins recording the amount of solar delivered to each unit. Units 1 and 8 are high energy users and 2-7 are average users. At the beginning of the month, the SolShare sends power at a ratio of the power that is being used, fully optimising on-site solar usage. However, towards the end of the month, the SolShare identifies that units 2-7 have received less than their fair share of solar. The SolShare, therefore, reduces the amount of solar that is sent to units 1 and 8 and distributes the excess to units 2-7. This active distribution optimises the amount of onsite solar that is consumed, saving each user the most amount from their energy bills, while ensuring that everyone receives their fair share of solar energy. If the system is unable to equalise the amount of solar delivered to each unit by the end of the month due to unforeseen circumstances, like a few cloudy days, then the difference is rolled over to the following month. An example of this can be seen with unit 8. It received more energy than the other units in the first month so begins the next month at an increased starting point to the other units. 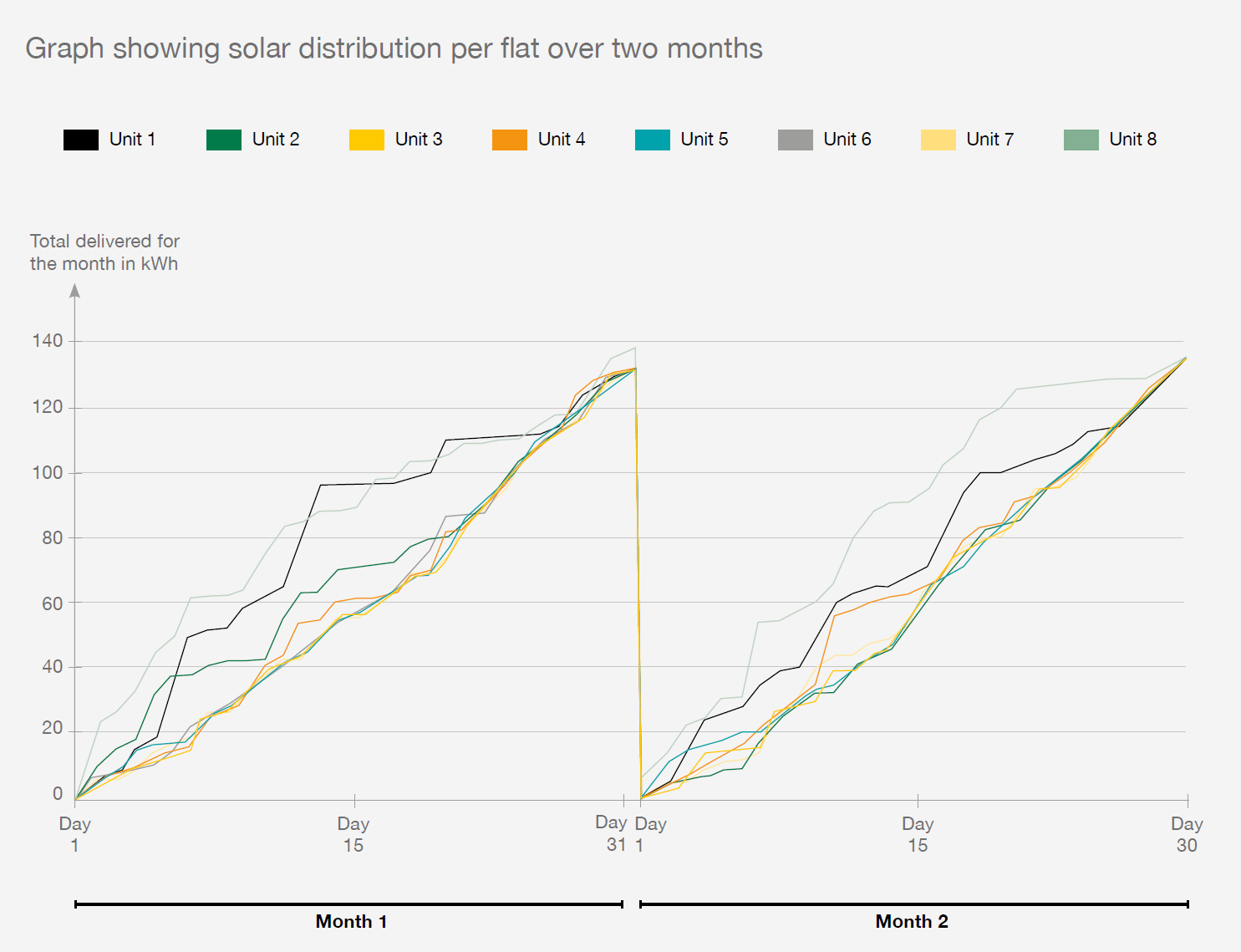 "The SolShare is designed to integrate so effortlessly that the resident will only notice one difference - significantly reduced electricity bills."

For a downloadable version of this document, click here.